Sumatra is an environmentally rich, geographically turbulent region. Quite recently, a mere hundred thousand years ago, the most powerful volcanic explosion the Earth has ever experienced created the world’s largest caldera, which became Lake Toba, the world’s deepest lake. Another, smaller explosion created a peak in the middle of the lake, which crumbled to form Samosir Island, the largest inland island in the world. About 50 km south lies the sub-district of South Tapanuli, hilly and densely forested, home to the endemic, critically endangered, Tapanuli orangutan. It is also home to the Mandheling and Ankola ethnic groups, part of the boisterous, extroverted Batak people. In the highlands, farmers grow Mandheling Ankola Sipirok coffee, known locally simply as Sipirok, sometimes using organic compost in plots intercropped with sugar palm, which gives Sipirok coffee its distinctive flavour. 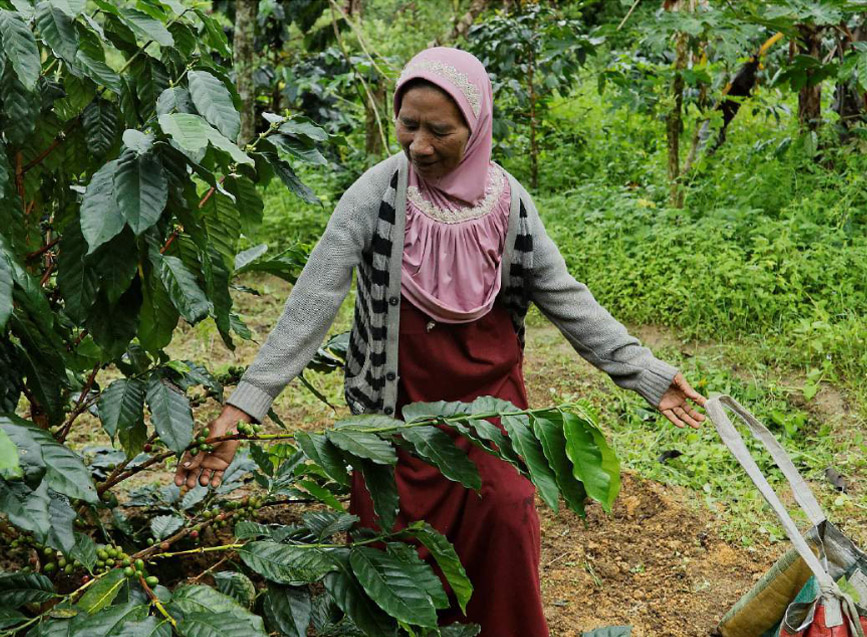 Sholi Pohan, a native of Sipirok and a coffee expert employed by Conservation International to design and lead training programs for coffee farmers, is intensely proud of the coffee produced in the region. He also believes it hasn’t yet achieved its full potential nor have its unique qualities been recognized by the high-end market. He says that farmers still don’t use optimal production techniques. From 2005 to 2012 following the tsunami, he worked in Aceh in Takengon and the Gayo Highlands, where coffee is a major crop and large contributor to the economy. 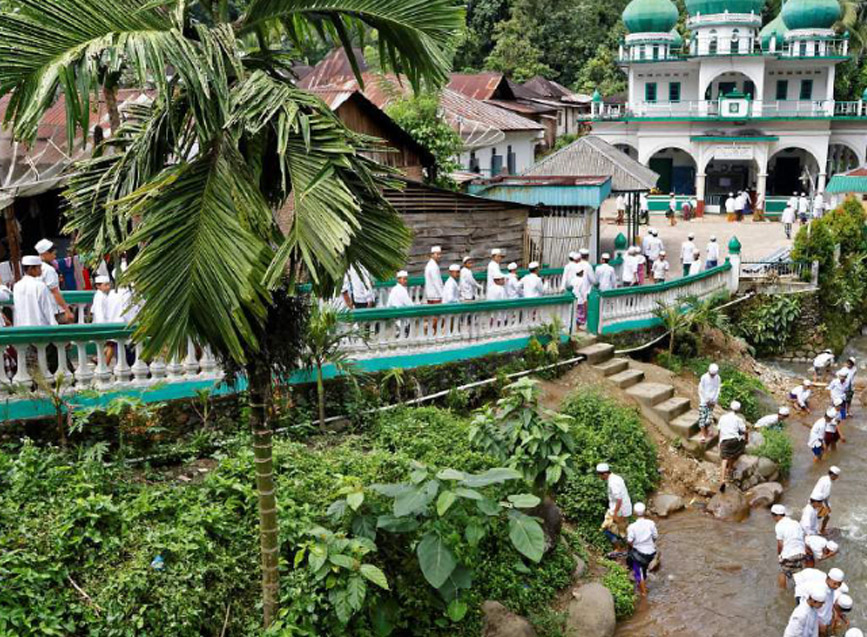 “Farmers in the Gayo Highlands are about fifteen years ahead of farmers here,” he said. “They understand the importance of selecting good plants and use environmentally-sound techniques that result in increased yields and higher quality.”

When he came home to his natal village, he found that farmers had little knowledge of intercropping coffee with fruit trees and vegetables, shade trees, controlling erosion, and organic compost and insecticide.

It’s better environmentally if farmers produce high-grade coffee on small blocks of land rather than cheaper varieties on larger blocks because there is only so much land available. Higher incomes from smaller plots help keep farmers out of the national parks that are home to orangutan, tigers and other endangered species.

One of the reasons that Conservation International was involved was that it’s better environmentally if farmers produce high-grade coffee on small blocks of land rather than cheaper varieties on larger blocks because there is only so much land available. Higher incomes from smaller plots help keep farmers out of the national parks that are home to orangutan, tigers and other endangered species.

While Sholi says that farmers’ cultivation techniques have improved through training, he also believes that farmers simply don’t understand their own crop.

While farmers in the training courses generally trusted him, they had little intuitive understanding of the processes they were engaged in. 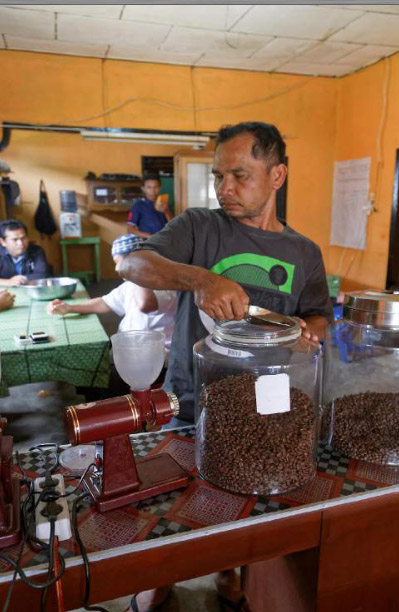 “Trying to improve their production techniques was like trying to teach a blind person to paint!” says Sholi. “They had no idea what makes the difference between good coffee and bad!”

To improve farmers’ knowledge, Sholi set up the Angkola Kopi Sipirok Coffee Shop in some spare space attached to the family-run, coffee-exporting business. The shop appears like any other grubby little warung that you find anywhere in rural Indonesia: unadorned, with rough benches and basic tables. However, it is equipped with a high-quality coffee roaster and grinder and is staffed by two lads with coffee-tasting certification.

Buyers could tell us that our beans were poor quality and we couldn’t argue. We knew we were being fooled but we couldn’t do anything.

The shop offers seven types of local, premium coffee. It isn’t a money-making venture. The vast majority of Sholi’s business comes from selling beans to wholesalers in Jakarta, Medan and Indonesia’s other urban centres. You can buy beans at the shop but not many people pass through this remote village. Most of the patrons are local farmers, who can drink as many cups as they want, of as many different types, free of charge. Sholi mainly runs it because he wants farmers to learn about the coffee they produce, to appreciate it. He encourages them to use the shop as a networking centre, to come and talk about coffee, to exchange tips about how to grow it, to exchange information about the market.

Sipping it, he leans back appreciatively and says, “Lemon, with a hint of palm sugar!” 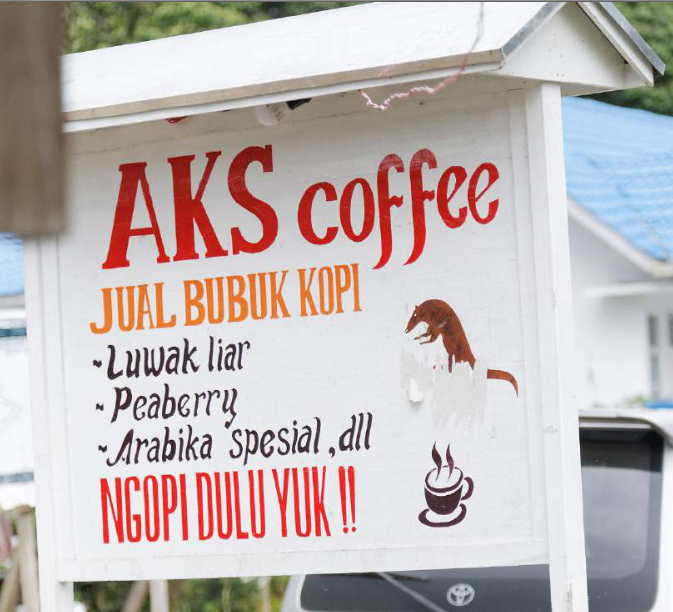 He then sips from another glass and remarks, “This one has the aroma of chocolate!”

Mursal agrees with Sholi that, until recently, he didn’t really know much about the crop he produced.

“Buyers could tell us that our beans were poor quality and we couldn’t argue. We knew we were being fooled but we couldn’t do anything,” he says. 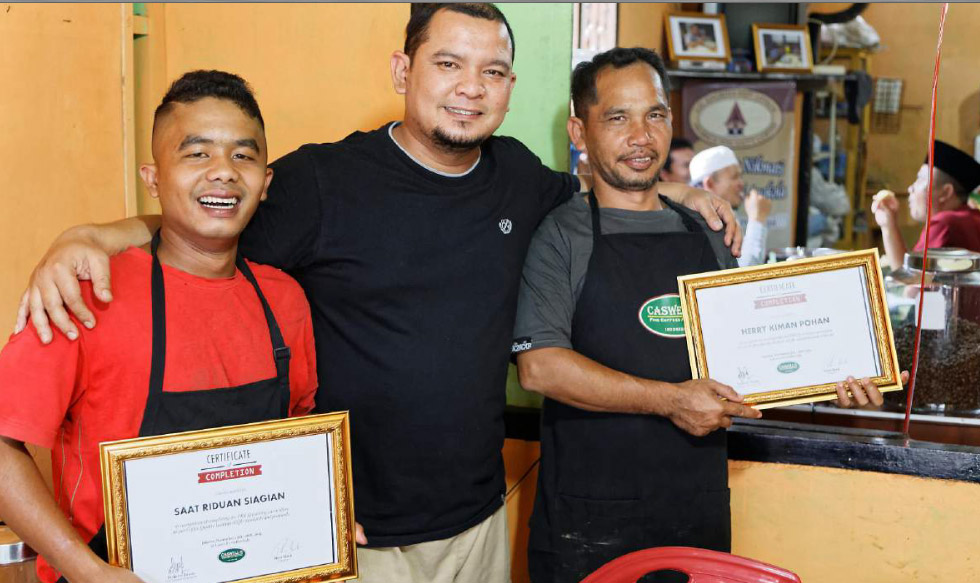 Mursal complains about how the lack of global recognition for Sipirok coffee affects the prices he receives. He mostly uses organic farming techniques, producing compost from vegetable waste and animal manure. He knows that in a lot of places, organically-produced coffee attracts premium prices. But the dealers often don’t pay any extra and just throw it into the same sacks as coffee produced with chemicals. He thinks that the only way to overcome this is to build a brand for coffee from the district.

“Most of the coffee sold as ‘Mandheling’ isn’t even grown in Mandheling,” he says. “Traders use that name because people know it. People outside the region often haven’t even heard of Sipirok coffee.”

Sholi nods and agrees, saying, “It’s not good enough to grow great coffee. People around the world need to hear the word ‘Sipirok’ and think ‘great coffee!’ The price you get for coffee depends a lot on people’s perceptions. After you’ve got a good reputation, all you need to do is to make sure you keep the quality up. And if farmers get paid more, they will be motivated to keep on growing good coffee. A lot of the value people place on coffee comes from perceptions. If we improve those perceptions, farmers will go on producing quality coffee on small plots using environmentally-sound, labour-intensive techniques just because they make more money that way!”

Around the table, the group of farmers nod approvingly and sip their coffee, enjoying the lemon and sugar-palm notes.

IRFAN KORTSCHAK is long-term resident of Indonesia. He is a writer, translator, editor and pop anthropologist. He has worked on conservation projects involving coffee farmers, forest conservation, and green agriculture. Find him at www.wayang.net

All photos credited to writer