If we take into account the manual, day-to-day caffeine consumption in the rural areas of Indonesia, then home-roasting has happened centuries we even have a term for it. Ever since the Dutch introduced cuulturstelsel for coffee in the 17th century Java, Indonesian farmers have roasted their coffee at their own home using ordinary utensils—a wok, spatula, terracotta pan, wood fire. It’s mixed with corn, rice, green beans or other starch growing in their back yard to stretch the coffee and makes it less bitter. Typically poured as tubruk with a spoonful of sugar, the coffee is consumed by the family or by the neighbors and guests. Coffee drinking is a morning routine and to some people, ceremonial.

During the industrial revolution when the roasting machine was invented, those who had some capital, initiated bigger production of roasted beans. Some of them are home business owners who roast and sell the roasted beans to neighbors and others would open a coffee house of their own. Roasting, despite being done at home and a smaller scale, became an occupation that actually generated income. This home-business activity shaped our taste for dark bitter coffee and is the base to a concoction of flavors that arise to define the local palette.

But after the Third Wave, our understanding of coffee shifted. The term ‘origin’ and ‘roast profiles’ turned our world around on how we view coffee. In the US, home roasting happened as a consequence of the Third Wave. As soon as drinkers understood that coffee has distinct flavors depending on its origin, the pursuit to unleash its truest flavors emerge. Pair this with internet and online shopping, purchasing a small number of green beans from Africa or Brazil when you’re in the US, isn’t impossible. 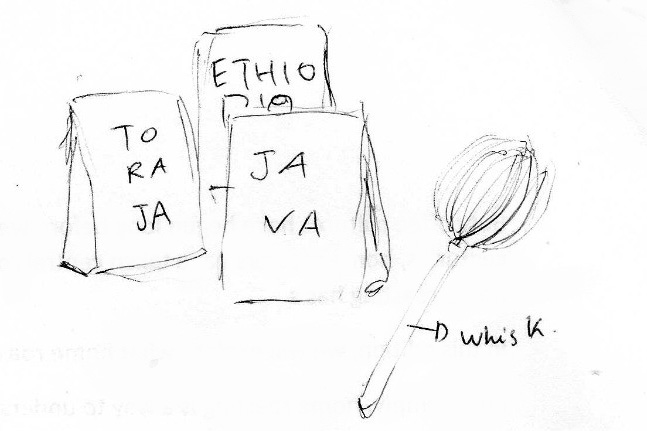 This is a whole different dimension of home-roasting. The kind that is driven by adventure, passion for origin and history, and craftsmanship, which is in total opposite to the manual home roasting to meet day to day consumption in Indonesia’s remotest district. The post third wave home roasters might spend more time tinkering the process to perfect their cup of origin, whereas a more traditional home roaster is tightly linked to fostering kinship and developing the local palette.

Both of them stem from a desire to produce only just-enough roasted beans at a time for personal consumption, but from this unfolds a million stories and alternatives that later shape the coffee drinking culture itself.

Home Roasting with a Pan
(1) Are you a home roaster?