Home roasting. Often times, this term comes to activists and maybe even you. The activity has become so ingrained in the Indonesian cultures long before the emergence of various coffee waves and countless modern roasting machines.

If we take few steps back to the farm and villages, roasting beans at home is actually the de facto method because it’s the only accessible way for farmers to roast coffee for themselves or for sale.

The result? Good for sure. Whether it fits your palette is a different matter. One thing that’s certain is that even though it may look as simple as frying crackers and using no sophisticated or computerized variables, home roasting is a long enduring activity. This proves that there is a market segment for home-roasted coffee.

Beginning in the village, this activity gradually appears in the cities. The home roasting trend is slowly emerging because competition among coffee shops is at an all-time high. The home roasters, coming from widely diverse backgrounds and for different motives, are in the scene to make a statement.

Ego Prayogo is one of the home roasters in the Indonesian coffee industry, though now also owns a small-scale roastery. Roasted coffee is used as a daily supply at his shop, Guyon Coffee Shop. While enjoying a cup of orange coffee ice milk and rissole made by his mother, Ego tells me that home roasting is an activity that began because he wanted to experiment.

Starting from his journey traveling different islands with his Vespa (even to point 0 on Pulau Weh), Ego studies the culture of coffee in every area he visits. Besides that, he also sees how each city has its own way to roast beans. He later uses these traditional techniques to roast the beans.

“When we talk about coffee cultures, each region has its own characteristics. That’s what I learned. The same thing goes to roasting. I have tried roasting beans using pottery, stoves, skillets until finally I have the capital and buy a machine,” said Ego. 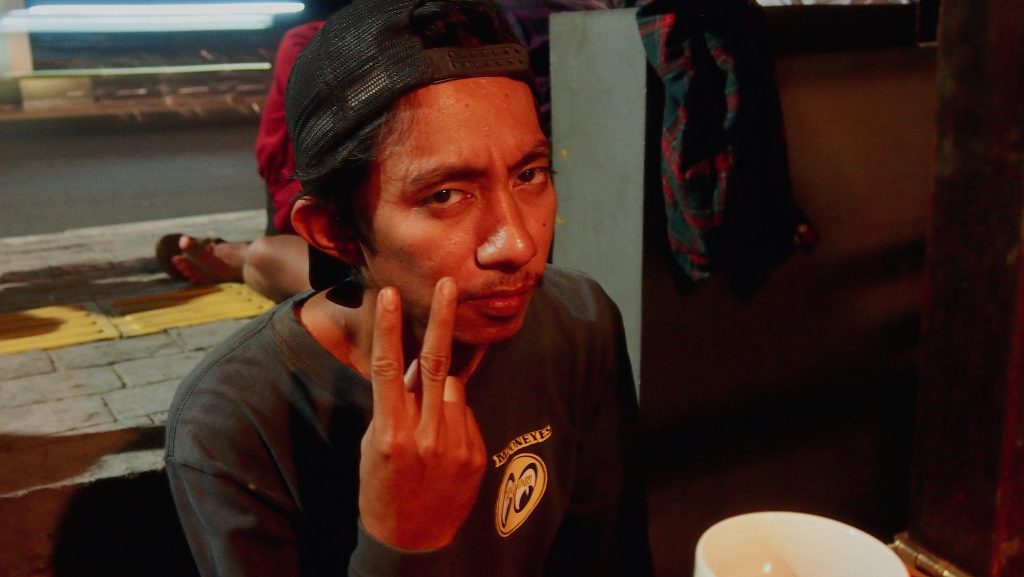 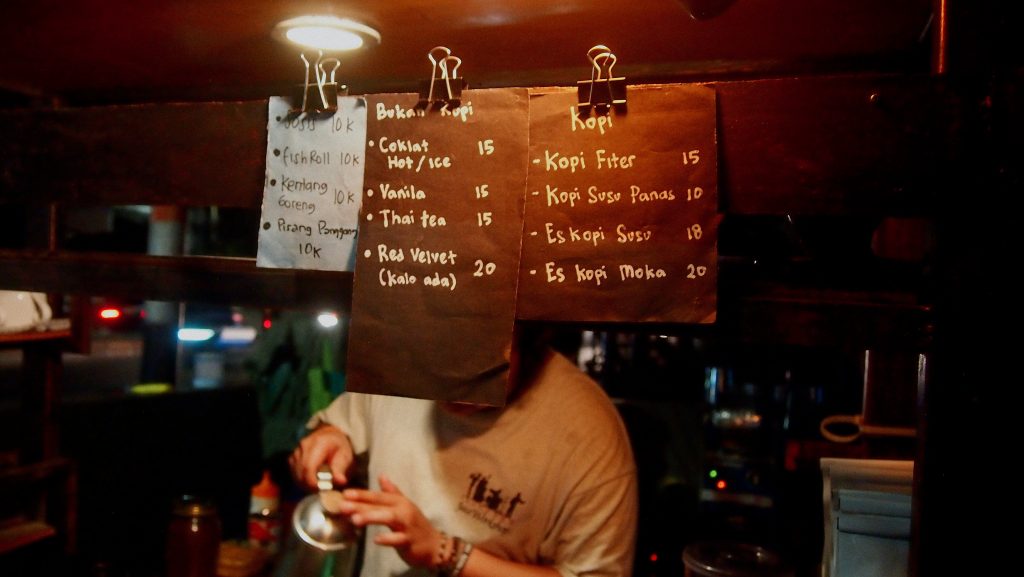 “Technically, do you think traditional roasting equivalent to a machine?”

“For now, I prefer the machine. Probably it’s not impossible to get consistency with traditional roasting, but it’s still much easier with machines.”

Currently, Ego is testing his second home roasting machine. His first Williams machine was replaced with a locally-made machine, Uncle John, with a capacity of 2.5 kilograms and using gas. According to him, the durability of the machine is quite good, proven when he roasted a total of one quintal of seeds nonstop. There is no burning smell or uneven roasted results. He even refuses to upgrade the drum for bigger capacity because he’s still happy with Uncle John.

Believe it or not, Ego roasts coffee at his rented house in Cipete. With his big endeavor amid the limited space, did the roasting activities disturb other neighbors?

“I don’t think so, especially to the point that I cut out everyone’s electricity. But first, they were afraid of the charred smell. But eventually, everyone understands. They get used to it.”

In terms of the home roasting community itself, Ego is assured that this activity is far easier to do now than ever, especially at a time where access to green beans is not as complicated as it used to be.

In the past, generally it’s difficult to find contact with farmers or brokers. Now, farmers have social media. You want anything, just choose. That is one of the factors that makes it a trend.

As a businessman, he also does not shy away from selling the beans at a marketplace. Then, talking about profit after the home roasting trend spreads, it turns out that his profits are impacted as well.

Usually roasting 350 kilograms a month, now he only roasts 100 to 150 kilograms. However, Ego responds casually, “yes the amount of roasted beans may decrease, but there will be income from the store as well and how can this be sustainable so it doesn’t just hit now, but it will drop far away.” Additionally, Ramadan and the harvest season are still around.

In between his sips of filtered coffee, he tells me that his home roasting activities had gone a long way from a simple activity at home. Currently, Ego is developing a coffee village empowerment program in Gunung Putri, West Java.

“In this village, the conditions are rather rural. About 3 hours up the mountain using a motorbike. There used to be tea fields that failed where coffee was later planted. But, due to lack of access to proper information, they were not familiar with how to process coffee. The land is wide, but messy. They don’t even have electricity. ”

Then what does Ego do in the midst of the limitations of the village?

“Initially, local residents usually meet us with suspicion: this people want to make profits every time. So in the first two years, I focused on building relationships with the local residents. It’s only recently that the local residents are more willing to work together with us. This project has been running for about 3 years. I helped them rehabilitate the garden, make irrigation and water springs, and build shelter and a small library for residents. There are around 30 families in total.”

“While working with these families, do you find any conflict with them?”

“Conflicts are and will always be around. But there are ways to work around it. The most important thing is to prove that we really want to help. The road access is still literally muddy, sometimes trees fall and temporarily close the road. We try to help building water turbines so they can generate their own electricity, then make irrigation channels from two springs. Some companies even attempted to acquire the pure springs, but we objected. Modernization often bring damages. For now, let them be.”

When Ego shows me a photo of the location, I were taken aback by the muddy road that is the only access to the location. Even more shocking is the shelter that Ego built. The shelter is well kept with a generous view of the coffee gardens, mountains and springs that can be used for bathing. If I’m Ego, I wouldn’t want this natural beauty to be demolished by modernization as well. Similar to roasting beans, modernization doesn’t always mean more satisfaction, especially throughout the process. 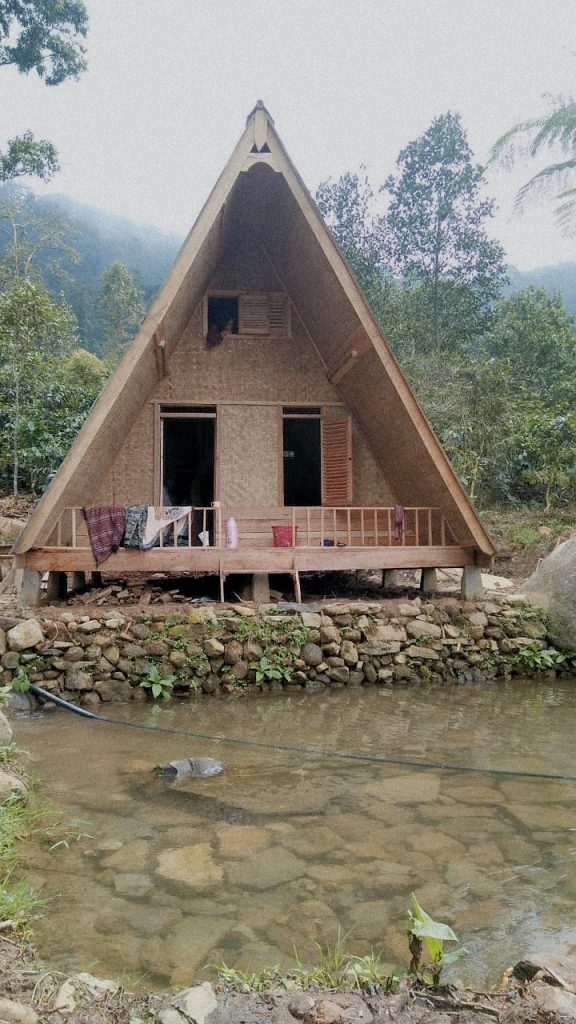 Shelter yang dibangun oleh EgoEgo is only a handful of activists in the coffee industry who are looking beyond the industry chain. Beginning his journey as a coffee enthusiast, then a shop owner, brewer, then home roaster to finally empower hulu, the source. Not everyone has access to this source and not everyone cares about what happens here. For me, in any industry there needs to be another Ego, so that we don’t only live a mentality of a consumer and a capitalist, but also a conservative soul.