Like a virus, coffee culture is spreading so fast it’s now the epicenter of both urban and rural lifestyles. Indonesia has known coffee since the days of our ancestors. But in today’s coffee world, it is no longer the plain black drink that we grew up with. It has transformed into a cultural symbol that is well-received by people from across different lifestyles, even with its increasing price due to a more careful treatment from crop to cup.

Brebes, a district located in Central Java, is no different. As the second largest area in Central Java, shallots are the main commodity for a long time, but coffee farms are slowly expanding. With the growing number of coffee practitioners at all levels of production, more and more coffee thoughts can be synthesized to further the coffee industry in Brebes. In fact, in the story below, home-roasting community is the driving force to this growing industry.

One of the pioneers in Brebes’s distinct coffee culture is Kelirumologi, established at the end of 2015. A modest building situated next to a gas station on Jalan Pemuda, this shop is owned by a young man with an adventurous soul.

Kelirumologi is an idea initiated by Ki Jaya Suprana, which roughly means a misunderstanding that is ironically adapted into the society and considered true. So why does Cecep choose this name for his shop?

I find a lot of kelirumonologi in the coffee world, especially among Indonesians—the taste, how to brew, how to roast, myths, and many other mistakes. Including myself—a lot of what I knew about coffee was not exactly right. Especially in Indonesia, bitterness is considered negative so it must be covered with sugar or other sweeteners. Even though coffee is bitter, but it has body, and in coffee there should be no bitter but there must be a body.

Cecep’s long story about choosing the name of his shop concludes that after all, we all learn from our mistakes and through these mistakes we can improve ourselves. Our conversation continues about his hobby as a home roaster. “At Kelirumologi, most of the times I was just experimenting with brewing, didn’t think much about roasting. Then one time a friend brought me green beans from Aceh, it’s a sample from his study on food technology. Not much, just 200 grams. So I tried roasting with ibrik, a Turkish brewing tool.

“It turned out that the results were good, assuming it’s done a certain way. And I’d roast them for personal consumption.

“I even tried to build my own manual roast with a 800 ml jug made out of stainless steel. From then on, I roasted more often. So I learned about the characteristics of beans, density, water content, post-harvest process, and so on.

“By learning from manual roasting, I think we get to be more adept at reading the beans’ characteristics. Alhamdulillah, finally after saving some money, I can buy the W600i machine. Ever since then, I was able to sell my coffee.

“In Brebes, getting roasted beans were difficult and we had to look online. But now that I have this small roasting machine, I get to help other coffee shops as well. Getting and roasting local coffee is no more impossible, even with an affordable machine.”

Going back to ibrik, choosing ibrik as a roaster isn’t without any reasons. When we ask why Cecep doesn’t use a pan instead—which is common for home roasting—Cecep explains that the shape of the ibrik makes it very possible to roast without stirring; just hold the handle and move the ibrik around on the fire. In addition, the shape is also capable of storing heat quite nicely so in a way, it’s controlling the temperature. 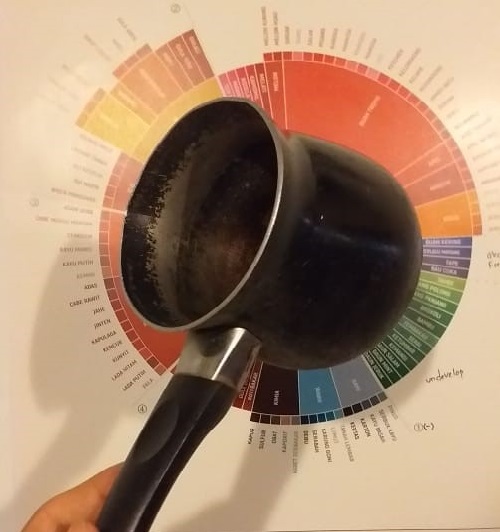 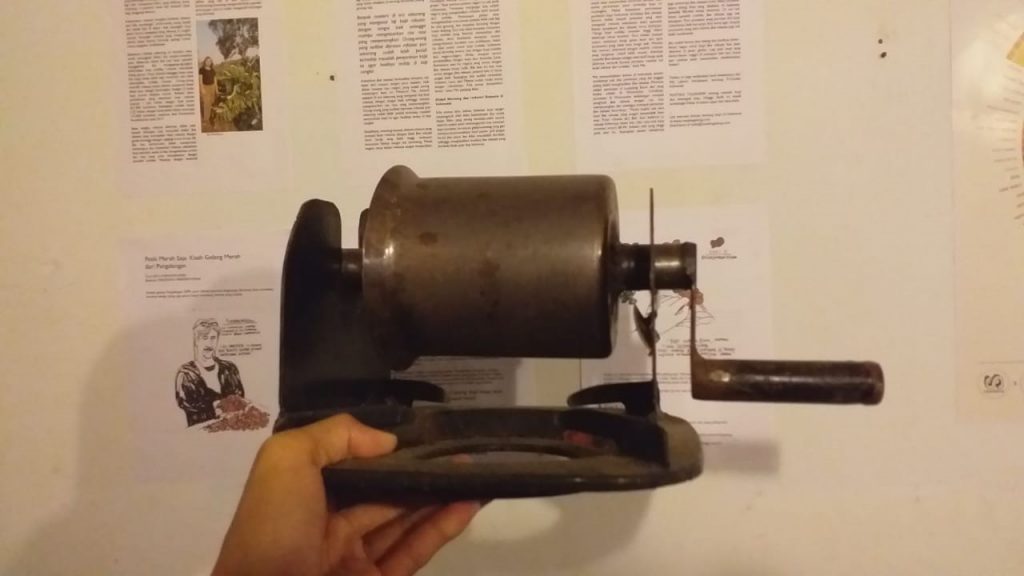 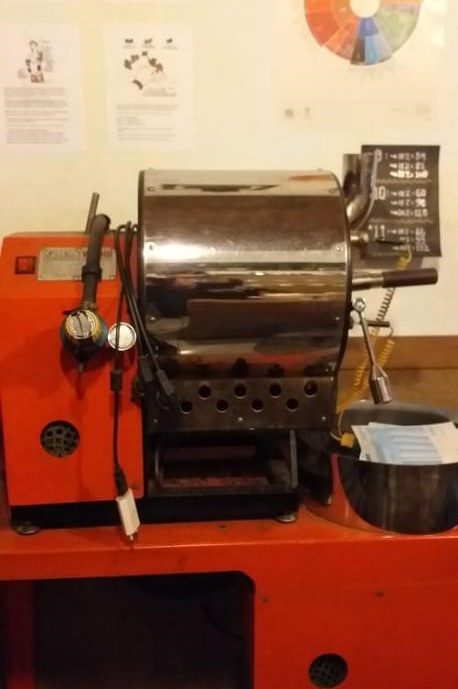 For coffee beans, Cecep roasts the local Brebes coffee beans as well as import beans. “All for the sake of learning and exploring the diverse characteristics of beans!” Cecep said.

While selecting various local beans, Cecep provides assistance and shares knowledge to local farmers so Brebes can produce better coffee and is able to compete, at least in the Indonesian coffee market. With the help of the local community’s chief, they can work with farmers more swiftly. Not only red cherry coffee, but yellow caturra variety as well. And it doesn’t stop there. Coffee activists in Brebes also promoting the development of Robusta Mokka.  Aside from skills-sharing in the area of farming, they also expand to post-harvesting. 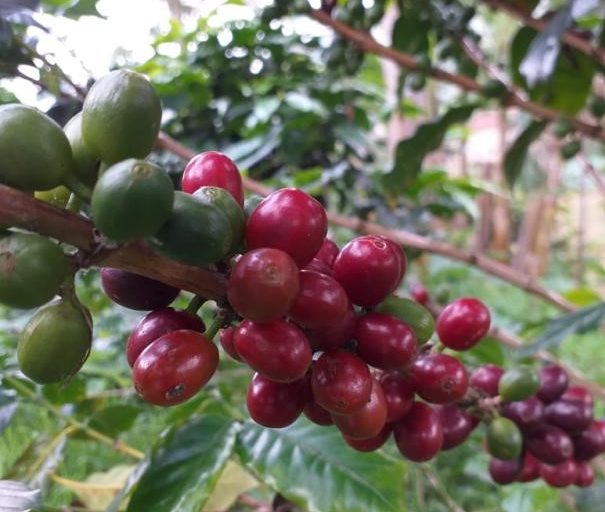 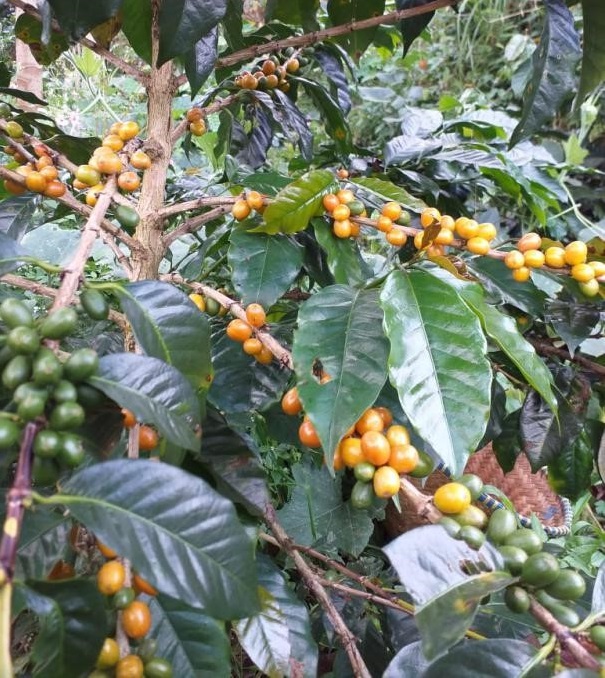 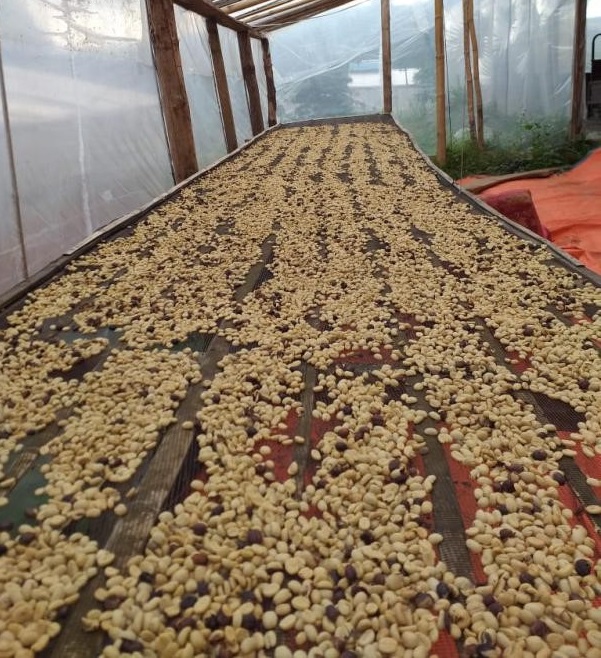 The community’s effort is now seeing results. If in 2015 there were only 1 coffee shop, there are now 7 coffee shops that are able to meet the consumption needs of caffeine coffee lovers in Brebes. The manual coffee roaster increases in number, as does the coffee enthusiasts.

In addition to planning together earlier, this young man named Cecep Dewantara still has other dreams. Although he still likes manual roasting, which has a special place in his heart, Cecep also hopes to roast with a machine made by Probat.

Well, with the spirit of exploration and support from coffee activists, everything can be realized for the sake of coffee, bro!