Subak Abian: A Prayer in the Coffee Field

What is the relationship between farming and spirituality? To Balinese, this relationship is very tangible and real. It’s called Tri Hita Karana—a Hindu principle to maintain harmony among humans, nature and Sang Hyang Widhi (God). When this relationship is balanced, the community grows. This is also the principle that is practiced by farmers in Bali, especially in protecting the most valuable natural resource of all – water.

The traditional irrigation system in Bali, subak, has been developed since the 9th century. After the establishment of Subak as a world cultural heritage by UNESCO, subak is even more known and discussed by the general public. For the Balinese, the Subak irrigation system not only provides water for the farm, but is a community-based irrigation system that springs from local wisdom to support sustainability with the nature and among each the individuals.

Subak is a traditional farmers’ cooperative that aims to spread responsibilities evenly among farmers in managing water irrigation and cropping patterns in the rice fields. As a farmers-based irrigation system, Subak is an independent and democratic institution. The existence of subak, which is nearly one millennium, implies that it has been successful in maintaining the balance and harmony among its members.

Subak is a traditional farmers’ cooperative that aims to spread responsibilities evenly among farmers in managing water irrigation and cropping patterns in the rice fields. As a farmers-based irrigation system, Subak is an independent and democratic institution.

In Bali itself, despite being a tourists’ island, agriculture remains to be the main source of income for many residents. Currently, there are 2,726 subak in more than 1,000 villages, according to data from the Bali Provincial Culture Office in 2018.

If you have traveled to Tegallang, then you are looking at this traditional irrigation system, specifically the type of subak yeh. Likewise, when you go to Jatiluwih. The design of this terraced field is to ensure that all farmers receive equal share of water. At one corner of a subak, you can see a pelinggih, where Sang Hyang Widhi is said to reside, which is placed close to Mount Agung. One pelinggih is owned by one farmer, so if you see five pelinggih in one subak, then there are five farmers who use the subak.

Like a quote from Confucius: “It does not matter how slowly you go, as long as you don’t stop.” So is Subak Suka Maju (literally suka maju translates to ‘keep moving forward’). Located in the village of Pekraman Langkan, Bangli, Subak Suka Maju, never stopped growing coffee, even though the trending crop in the last two to three year is to grow oranges because it’s cheaper to maintain and produce greater yield.

According to Edi Swastawan, the young generation of coffee farmers in Subak Suka Maju, this subak has been around for a long time, even when his grandfather was a child. “Sing nawang kak uli pidan pastine, sisik cik sube get adak subak (my grandfather isn’t sure how long the subak has been around, but when he was young, this subak was already here).” Edi also added that in this subak, there is a unique coffee variety named arob.

“Coffee trees in this subak have been around since 1986, but to this date, it is still productive. In fact, according to a theory, coffee will be too old to grow fruits after ten years. But this tree has been around for more than 12 years. According to my grandfather, the name of this variety is arob, which stands for arabica-robusta. As for myself, I have never seen it in journals or books about this type of variety,” said Edi.

Edi also explained how this variety sprang for the first time in this subak, based on the story of his grandfather. “Early on, there was a farmer named Wayan Patrem who planted robusta and arabica alternately. Maybe there was some kind of genetic engineering—the flowers’ seed spread and copulation occur.”

“It could be a bee or an insect,” his grandfather interrupted.

“The tree bore fruits and the fruits fell to the ground, then grew and became a tree. This happened several times and the variety known as arob emerged. According to the farmers, arob coffee is good because when it matures, the leaves are plenty and the stems are soft,” said Edi.

Unlike the typical subak yeh at Tegallang and Jatiluwih, the type of subak commonly used by coffee farmers is subak abian, which is good to manage dry lands, because coffee does not need as much water as rice. 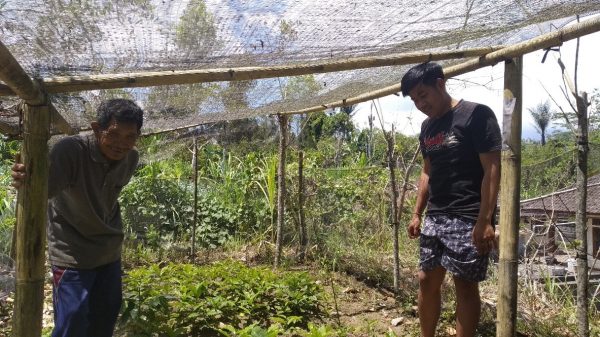 When we met them at home, Edi and his grandfather told us about the coffee plantation and his grandfather’s involvement in Subak Abian. According to them, by joining as a member of Subak, they also own the rights and responsibilities to manage the subak.

Edi and his grandfather believe strongly that the subak is the manifestation of Tri Hita Karana values: on respecting nature, fellow human beings, and God. By becoming part of the subak, they have participated in saving the environment and living the concept of sustainable farming.

To maintain the subak tradition, some subaks in Bali are prohibited to be traded. According to Edi and his grandfather, some of these subak include Landih and Trunyan. This is the Balinese’s efforts to preserve the land and the subak system.

To maintain the subak tradition, some subaks in Bali are prohibited to be traded. According to Edi and his grandfather, some of these subak include Landih and Trunyan. This is the Balinese’s efforts to preserve the land and the subak system. 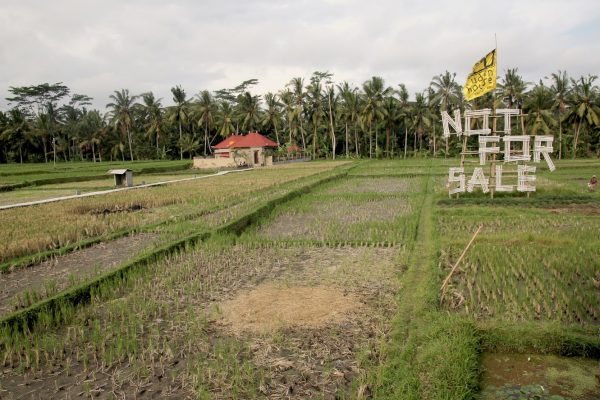 Now, Edi and his grandfather are still waiting for the rainy season to plant the young coffee trees that they have prepared. The types of coffee they will grow include sigararutang, horse cart 1, komasti and cobra.

During harvest, Edi and his grandfather will bring the coffee cherries to the cooperative and as members of the Subak, they will receive a fair fee from their sales. In addition to a more equal relationship with other members, if there are ceremonies and rituals related to subaks, the labors will be shared among other members too. Even though it takes a long time to see the results of the coffee they planted, Edi, his grandfather and the subak Suka Maju members still consistently and passionately grow coffee.