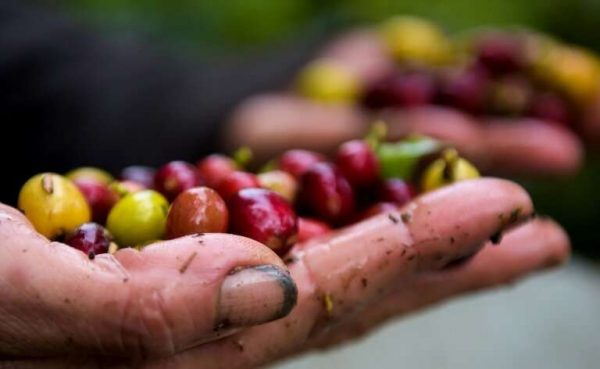 Before we begin, please consider these questions: Are you a language lover? Do you care deeply about spelling consistency? Get giddy over etymology? Think syntax is sexy? Are you curious about coffee? You’re reading Singalong, so we’re almost certain you answered ‘yes’ to at least one of these questions. If you didn’t, thanks for reading up until now. Ciao.

Now that we’ve confirmed your interest in language and/or coffee, we have some further questions: If you were writing about the world’s two dominant coffee species and using their common names, would you capitalize them or not? Arabica or arabica, Robusta or robusta?

Do the non-capitalized versions appear a little strange to you? Do they appear as if they should actually be part of the binomial names Coffea arabica and Coffea robusta (which is actually a synonym of the correct species name Coffea canephora)? Do arabica and robusta look like they’re out there in the rain without their capital letter umbrella?

I find the fact that arabica and robusta are capitalized in most cafe marketing collateral and coffee media irksome, like being served a cappuccino rich in color with impressive latte art (wow, a phoenix!) which turns out to be completely tepid and served sans biscuit.

International media such as The New York Times, The Guardian and the BBC use both spellings (I guess their style guides aren’t as watertight as I assumed). National publications The Jakarta Post and Kompas are inconsistent too, though the latter leans heavily towards capitalization. detikcom is solidly in the capitalization camp.

While it seems many major publications are nonplussed about coffee consistency, dedicated coffee media is adamant that arabica and robusta are rightfully crowned with a capital. Only two of the 17 listed in Coffee Channel’s “17 Must-read Blogs for Coffee Enthusiasts” use lowercase. The magazine of Otten Coffee, Indonesia’s largest online coffee retailer, is also guilty. How it pains me to admit that this very publication is too—including yours truly (how naive I was!).

Some of you may be familiar with the Specialty Coffee Association (SCA). According to the SCA’s website, it’s “a nonprofit, membership-based organization that represents thousands of coffee professionals, from producers to baristas all over the world.” Alas, the SCA is also guilty of crimes against spelling.

How could myriad news outlets, websites and blogs, and the world’s peak specialty coffee body, get it wrong? One possibility is that because the binomial name Coffea arabica is used far less frequently than its common counterpart, Coffea’s capital “C” is carried across to arabica. This possibility was proposed by the editor of 25 Magazine, the SCA’s quarterly journal, after I contacted its press office to enquire about this particular style decision.

While I understand this possibility—that the weight of the caps is carried across from Coffea to arabica—I believe it’s got far more to do with glamor than orthography (the conventional spelling system of a language). Specialty coffee is sexy, so our hallowed beans Arabica and Robusta apparently deserve their chic capital letter accoutrement.

While I understand this possibility—that the weight of the caps is carried across from Coffea to arabica—I believe it’s got far more to do with glamor than orthography (the conventional spelling system of a language). Specialty coffee is sexy, so our hallowed beans Arabica and Robusta apparently deserve their chic capital letter accoutrement.

As former Missouri State University professor of linguistics, Christina Biava, wrote in response to my question “Why are arabica and robusta generally capitalized even though this is incorrect?” on Quora, “Spellers of English seem to be going crazy these days to capitalize all kinds of words, more like the German tradition.” Ha! I couldn’t agree more, Frau Christina!

“In addition to this,” she continued, “I’m guessing that the similarity of the word ‘arabica’ with ‘Arab,’ which is capitalized as it names an ethnic group, and ‘Arabic,’ which names a language, is also part of the desire to capitalize ‘arabica.’ I don’t think names of coffees merit capitalization unless the name is also a name of a place or ethnic group, which are usually capitalized, or perhaps the name of a particular company.”

Another vivaciously vindicating answer was submitted by the author David Miller: “You’re right. The species name that follows the name of a genus is conventionally rendered in lower case. Thus, Coffea arabica and Coffea robusta. Those are shrubs from which coffee beans are picked. The species names then became detached and commercialized, so entered popular parlance as proper nouns.”

So there we have it, dear readers. This is purely a case of commercialism causing incorrigible capitalization. (Don’t get me started on chefs and baristas who insist on Chef and Barista. Unless at the start of a sentence, do writers ever capitalize Writer? I think not.)

Now, can I please order a hot cappuccino made from my current favorite arabica, Kalosi Toraja (correctly capitalized as these are proper nouns), with impressive latte art (a buffalo perhaps?). And don’t forget the biscuit.